Whoops! We fell behind our “daily 6pm” blog.

Fun facts about your hair, we bet you didn’t know! It wouldn’t be a true Australia Day without some fun in the sun and awesome tunes from the Triple J Hottest 100 Countdown. But if you thought for a second that you could slap on some sunscreen, chuck on a hat and pump up the countdown this Australia Day, you’ve never been more wrong. It has come to our attention that it’s now about to fall on the 27th. And no we’re not talking about Australia Day, we’re talking about the countdown! How can we possibly celebrate Australia Day without the Triple J Hottest 100 countdown? It would be like using your hair straightener without Hottie Heat Spray first. It just feels criminal. And some people are even arguing that it’s “UnAustralian.”

Then there is the fact every backyard bbq in Australia most likely tunes into JJJ on Australia Day, so now that isn’t available, is there a playlist out there that even comes close to the straight fire us listeners have been blessed with these many years before? We’d like to think the one we created is actually pretty good. And just like the name describes… We’re Goin’ Troppo!

Now we never said we could replace Triple J but considering the eskies will be chockers and the bbq will be full of snags, it would be a crime not to have a coldie cracked and the tunes blasting. So we just figured we’d give ya a hand if you’re strapped for time and just as shocked as we were to hear triple J is coming in hot a whole day behind the mark.

But don’t worry JJJ.. SR Haircare has come to the rescue!

Let customers speak for us

I am guilty of rarely using heat protectant, especially when I use to use heat on my hair all the time. However ever since using this, I never NOT use it! I love how it protects my hair from the heat tools I use, not make it frizzy at all and also leave such a nice shine afterwards. I’ve definitely noticed a difference in my hair growth when using this protectant! I bought my friends SR Haircare products and this was one of them, they all loved it so much and loved every product too! 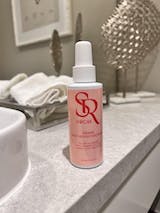